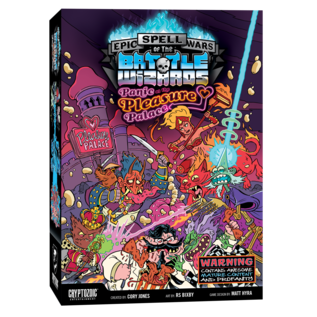 Epic Spell Wars of the Battle Wizards: Panic at the Pleasure Palace, the fourth game in the Epic Spell Warsseries, takes the trademark humor-filled, mature gameplay and artwork to a new level for 2-6 players. Magically transmitted diseases (MTDs) are a powerful addition to the proceedings, leading wizards to suffer Crotch Krakens, Genital Harpies, and Gorgonorrhea, among other enchanted afflictions. MTDs also give players glyphs that lead to spells that are more epic than ever. In addition, players vie for control of the standee, which protects them from the MTDs that might come their way.