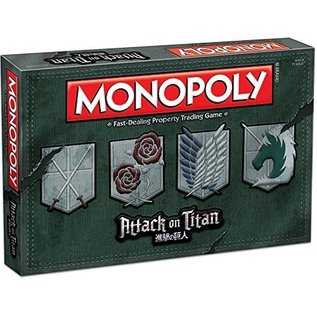 Monopoly is a roll-and-move game where players move around the game board buying or trading properties, developing their properties with houses and hotels. When opponents land on players owned property, the owning player collects rent from the landing player. Owning sets of properties increases the rent paid to the player who owns them, by the player who lands on the square. The ultimate goal is to have the most money and drive opponents into bankruptcy.

The face of humanity rests in the Attack on Titan edition of Monopoly® as players travel the game board building walls and gates and assembling an elite squad to crush the titan threat and ensure the survival of mankind.