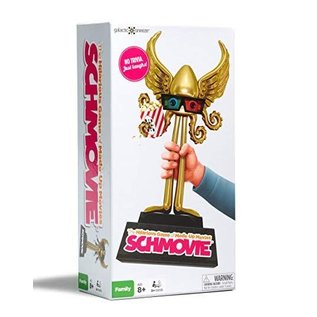 C$27.95
C$19.99 Excl. tax
What would you call a horror film about an evil booger? A sci-fi about a gangsta lunch lady? A romantic comedy about a clumsy proctologist?

In Schmovie, you're trying to convince others that you have the best title ever for whatever concept is being pitched to the producers. What's the actual storyline? Doesn't matter - the title is what's important, so put your all into making something memorable!

Each round, you'll roll the genre die (which has sci-fi, rom-com, horror, action, drama and producer's choice), then draw two premise cards, one What? and one Who?. The combination of those three items gives you the concept for the movie. Now you just need to come up with a title. Do a good job, and you'll win a schquid trophy; collect enough trophies, and you'll win the game.