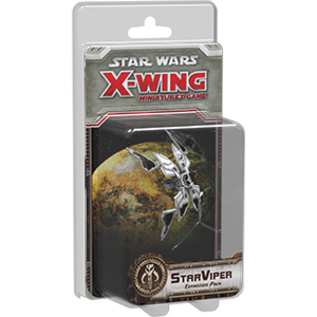 C$29.95
C$14.99 Excl. tax
Prince Xizor worked with MandalMotors to ensure that the StarViper-class attack platform would be one of the most formidable fighters in the galaxy.

The StarViper Expansion Pack - part of the sixth wave of starship expansions for the Star Wars: X-Wing Miniatures Game - features one pre-painted StarViper miniature, sculpted at 1/270 scale and brought to life as a potent, well-balanced ship that can quickly destroy opposing ships even while evading enemy fire. Naturally, the expansion also allows you to field Prince Xizor in his custom StarViper, the Virago, which makes use of various system upgrades and illicit technology.
Clearance (110)