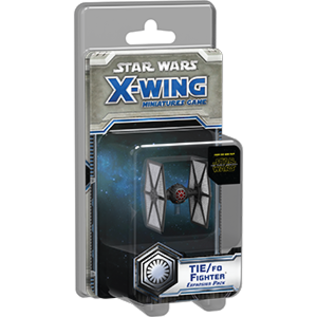 Following the traditions of the Galactic Empire, the First Order has kept the TIE fighter design in service, but has updated the craft to modern combat standards. The TIE/fo Fighter Expansion Pack allows you to reinforce your X-Wing squadron with one of these modern First Order TIEs. In addition to its detailed, pre-painted TIE/fo fighter miniature, youâll find six ship cards, two new upgrades, a maneuver dial, and all the tokens you need to fly your TIE into battle!

" "To be granted command of a VT-49 Decimator is seen as a significant promotion for a middling officer of the Imperial Navy. A heavily armed transport, the VT-49 Decimator is one of the Empireâs most feared warships, often used to provide long-range reconnaissance or to deploy raiding parties past enemy forces.

The VT-49 Decimator Expansion Pack brings this intimidating Imperial gunboat to X-Wing as the gameâs largest ship yet designed for Standard Play. Even at the gameâs signature 1/270 scale, the expansion packâs detailed miniature towers over its base and smaller starfighters.

In addition to its imposing, pre-painted miniature, the VT-49 Decimator Expansion Pack introduces four ship cards, three debris cloud tokens, a new mission, a maneuver dial, and all the tokens you need to fly your Decimator into the thick of combat. Finally, youâll find thirteen upgrade cards, which introduce a variety of crew members like Mara Jade and Fleet Officer designed to help you fill out the Decimatorâs three crew member slots.