Lords of Rock, The

Home / Lords of Rock, The 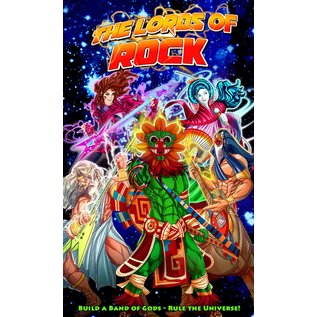 After many millennium of ruling the universe the various gods of the universe find their power diminishing. The gods came together and the ones with remaining power agreed to wage a battle for the control of the universe.

They realized the only way to do this was adapt to the modern age. They have agreed to a galactic battle of the bands. Battling across times and all over the world they agreed that the group with the most fans at the end of the tour will hold dominion over the universe.

You assemble a band of gods from the pantheons you can choose from. You plan Concerts to gain fans, rocking and rolling against each other to become the ultimate force in the universe.

When playing the players play a series of concerts at different venues. The venues vary in difficulty from needing a single skill to succeed at the concert to needing all four skills. The venue card will show you what skill(s) you need and how many points (millions of souls) you will gain depending on where you finish in head to head competition with the other bands.

Your band has a base value for each skill and your set list cards can boost your scores or hurt someone else's as you work to out play each other. You battle with your set lists to determine where each band finishes in the competition.

After two rounds of venues the band with the most fans will be the winner and rule the universe unopposed. FOREVER.