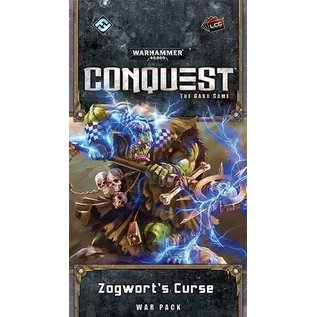 Unleash the power of the Waaagh! inÂ Zogwortâ€™s Curse, the fourth War Pack in the Warlord cycle forÂ Warhammer 40,000: Conquest. The Orks find a powerful new psyker to lead them in this War Pack, allowing you to spread a green tide of destruction across the planets of the Traxis sector. Alongside the vicious Orks, you'll find powerful new vehicles for the Astra Militarum, dark wargear for the servants of Nurgle, and hideous Dark Eldar torture events.

This War Pack contains sixty cards, including one warlord with its signature squad and three copies each of seventeen unique cards, giving you a full play set of every unit, support, event, and attachment. You can join the hunt with the Space Wolves, fly with an Eldar Vyper Squad, or pilot Tau heavy battlesuits. No matter which faction you support, youâ€™ll find plenty of cards inÂ Zogwortâ€™s Curse.